Like finding out that the attractive girl or guy you’ve been trying to look good in front of is actually disturbingly moronic and thought George W. Bush was an awesome prez, Spelunky gave me some serious mixed feelings. Enough to eventually point me away from it in favor of greener, gaming pastures. (which, in this case was Magic: The Gathering, and not a videogame at all) Spelunky as we know it today is actually the second iteration of the original Spelunky freeware title. The game took the indie scene by storm, suddenly becoming the “most perfect game ever created” in the eyes of hipsters everywhere. Derek Yu’s cavern exploring rogue-like lures in newbies with its simplistic premise and cartoony art style. The deception here is that Spelunky is really a consistently challenging, pain-in-the-ass that can be at the same time, rage-quittingly frustrating, addicting, and also immensely rewarding. Underneath the happy-go-lucky charm of it all, Spelunky reveals itself for what it truly is: a 2D, randomly-generated Dark Souls. The game has a steep learning curve due to the way it thrusts the game upon you without properly introducing anything more than the most basic of actions, and in this way, is actually surprisingly deep and full of content. (Something the developers of Evolve intentionally forgot to do with their own game.) However, Spelunky’s randomness and unforgiving lack of mercy does have the potential to turn off many gamers. Spelunky tasks the player with traversing downward through four worlds, each consisting of four randomly generated 4×4 levels, in order to claim the massive treasure located at the center of a long lost, ancient civilization’s temple deep underground. The catch is the game starts you off with only 4 hit points and death means starting over from the beginning. Oh, and many of the enemies and traps in Spelunky hurt your little explorer for more than 1 hit point. In fact, there are certain traps and enemies that will be able to kill you instantly, as well as plenty of instances in which something completely unpredictable will lead to your eventual demise. Armed with some ropes, a few bombs, and a very short range bullwhip (which can be replaced with better weapons should you find/purchase them), it is not an exaggeration to say this game is difficult. All the characters control the same and none have any special abilities. The two movement speeds are too slow and too fast. The whip feels awful to the point of unreliability, especially against flying enemies like bats. The inability to zoom out in any capacity or look down further than a few inches also led to some stupidly avoidable deaths. I couldn’t see what I would be landing on and died on some spikes. By the way, the deaths in this game, particularly that “falling on death spikes” one, are more uncomfortable in Spelunky than in other more mature games, like say, Mortal Kombat. At least there it’s expected. Here, seeing the whimsical whip-toting spelunker slowly sink onto a pit of blades feels weird. Not necessarily something I’d dock points off for, but it’s just a strange crossroads between the game’s tone and its content.

There’s only a few game modes in Spelunky. There’s two single player options, and a chaotic multiplayer one. Didn’t get to try too much of the multiplayer, but it’s certainly not the main attraction. (And neither is the unorganized mess that comes from trying to cram four players on the same screen in Adventure Mode) There’s a challenge of the day sort of thing going on here too, but that also isn’t what every indie game lover is creaming their pants over. Nope, it’s the “perfectly designed” single player. I’ll just say it now. This game is far from perfect. The game’s fans will often fall back on “it’s not the game that’s unfair, it’s just you that has to get better.” Really? What about when the levels form themselves into something you cannot traverse without taking some form of fall damage? Or when the shopkeeper randomly calls me a terrorist and is suddenly obsessed with gunning me down because something hurt him off screen? That’s my doing? Why are there shopkeepers anyway? And why make their wares randomized too? Can’t I just pay more for the things I specifically want, instead of having to struggle on because the store was selling nothing of use to me? That seems like game design from an iPhone free2play, except here there are no microtransactions, so what’s the point? Just to screw me? To emphasize that this is a game of luck regarding whether or not i can get my cape/shotgun combo? Why is there no mode in which players can place a limited amount of saves? The Impossible Game even had one of those! Why does the game allow you to build shortcuts to worlds 2, 3, and 4 if the further you go, the less prepared you’re going to be to face their challenges anyway? Why do the ‘dark levels’ even exist? The game takes place in a cave underground, shouldn’t they ALL be dark levels?!? Let’s not forget to mention the inclusion of utterly useless pick-ups like the uncontrollable teleporter, or the ‘why-was-this-put-in-the-final-game?’ web gun. The game places a strong emphasis on player responsibility ; it’s up to the one holding the controller to figure out the mechanics and ways things in the games interact. (More often than not, this just means dying whenever you come across a new enemy.) In theory, it’s a good idea that works well with the gimmick of the rogue-like genre. Instead of getting better at specific tasks, you get better at the game as a whole. However, I still managed to create a decent sized list of BS, that exists outside of my own control. On paper, Spelunky sounds nice. Things like “I should throw the pots instead of whipping them, just in case they have a snake in them,” is a good examples of this. Dying instantly on the final level because you had no idea the little purple circles that can follow you and go through cover are actually the hands of the grim reaper himself, is not a good example.

Things I liked about Spelunky: the feeling of accomplishment that came from completing my own miniature goals, the anticipation and excitement of getting to see what creatures and traps await in the next levels, the ability to adjust a setting that makes the “Damsels” (which can be brought to the end of a level for 1 extra hit point) into adorably empty-headed pugs, and of course, the phenomenal soundtrack. (I feel like I use that word a lot to describe good OST’s) I came into this game not sure of what to expect, music wise. The main menu screen’s use of accordion wasn’t exactly a confidence booster either, though it did set the tone for the kind of oddball discoveries the game had in store. It wasn’t until I reached World 2, the jungle, when it started to click for me. World 1’s soundtrack began to grate on me after a while, (and is honestly one of the reasons I don’t want to go back and play) due to the fact that I had to hear it over and OVER and OVER, death after death. Many of the tracks in Spelunky’s soundtracks are synth keyboard tunes, coupled with atmospheric effects on certain levels that combine to make the game feel both fun and tense at the same time. My favorite tracks though, were the ones that had jazz. There I was, playing the game, trying not to die and thanking Dog for every level I managed to get past. Then out of nowhere, I’m suddenly hearing the smooth sounds of a saxophone, taking me away to a picturesque winter wonderland.  “Smells Like Wet Fur” is now one of my favorite videogame songs thanks to Spelunky. The soundtrack is so fresh, I could honestly recommend it just to reach World 3. 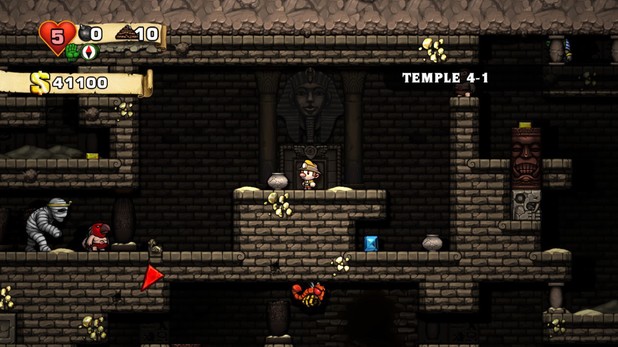 Spelunky is pretty much that asshole professor every college student eventually has. (complete with the group of sycophants trying to brown nose) He discusses jack in class, expects most of the content to be learned from the homework, and then tests on things that were covered in neither. BUT! he might every so often pull a Ron Burgundy in the middle of class and give everyone a taste of a hot lick on the jazz flute he had hidden up his sleeve. Except it’s an entire sax he had stowed away, and sometimes you can get extra credit for finally figuring out a good way to kill shopkeepers… or… whatever a good classroom equivalent would be. Recommending Spelunky isn’t very hard. It’s got style and generally well-oiled design, but I would not say it’s a must buy. The repetitious nature of the game, and the dominatrix levels of punishment it’ll unleash could lead many to just quit on this game without even making it past the first world. The lack of any sort of practice mode or mode in which you can save progress, means that for many gamers who prefer a linear experience, or would simply rather not get screwed out of their perfect run because of instant death beams, are going to be wasting their money on what is essentially a glorified flash game. However, for those who are willing to spend enough time on one game to master its systems, Spelunky is a well spent purchase. The flavor of the game’s soundtrack adds a lot for me personally, so for those who don’t enjoy jazz or music that sounds super 80’s, this isn’t gonna blow you away. As for longevity, I obviously can’t stick to one game, but even if I could, I’m definitely not one of the people who can go spelunking for hundreds of hours and not feel like I wasted about 340 more hours of my life than I needed to on it.

Obligatory Number at the End: 7/10