Not to be confused with the similarly titled anime, Titan Attacks does not feature even one skinless, giant person. WHAT A DISAPPOINTMENT! This game gets a 0/8. Remove this from the PS Store at once! What a lousy cabal of hack frauds they have working  at Puppy Games. All we get from Titan Attacks is a 100 wave romp through Space Invaders for the ADD audience. (Ok, I’m turning the sarcasm off now) Titan Attacks is not ashamed of where it drew its inspirations from, and it does so tastefully. In a world where so many “new” ideas don’t know where the line between homage and rip-off is, this game does a fine job of making something flashy and new out of an old concept. Though technically not a true, licensed Space Invaders game, Titan Attacks has a lot of retro flavoring that does a better job of capturing the old-school, tank commander feeling than the official Space Invaders HD title. (though I did enjoy the slick, modern vibe that game had too) Titan Attacks is incredibly simple to play and won’t require you to invest any more than a few hours of your life to complete. It’s not much of an entree, but does an admirable enough job to at least merit a couple packs of your favorite flavor of Pop Tart.

As soon as the game starts, the aesthetics speak volumes about the kind of game you’re in for. It has that indie game 8-bit thing sort of going on, because well, why the hell wouldn’t it? The obvious connections to two button arcade games warrants a befitting style. From the pixelated saucers and lazer blasts, to the vector asteroids, the game could easily be mistaken for something played with a joystick. The game isn’t even played in wide screen, opting for 4:3 to complete the look. The progressive electronic soundtrack isn’t chiptune as one might expect, instead relying on a quick tempo beat to keep players engaged. It’s nothing too special, but does compound the techno, extraterrestrial style the game is going for. Overall, there’s generally pleasing sights and sounds to be found here.

Titan Attack’s core gameplay never changes. You move from left to right, smash on one button to shoot upwards, and then press another button every so often to use smart bombs. It’s exactly the sort of thing one would expect from a new age Space Invaders. The game starts you out with a dinky little box that can maybe shoot once every other second, but once you can spend some of the money earned by shooting alien goons out of the air, the game begins to amp up. The store menu is accessed automatically after every wave of the game. It’s here where you can purchase shields, bombs, upgrades to rate of fire and damage, as well as equip auxiliary weapons. The catch is that shields (which are essentially hit points) and smartbombs (screen clearers) do not regenerate in any way during the game. You might get lucky and earn a few by doing well in some of the game’s shooting range bonus rounds, but for the most part, getting rekt by the increasingly difficult waves means having to fork over what you might have been saving up to attach another gun to your tank. In this way, the game both rewards good play and keeps things from getting too easy too fast. Players who know what they’re doing can earn more money by collecting the parachuting aliens that sometimes eject from their ships, as well as by picking up money drops. This becomes the key to future success, as the levels do evolve into softcore, bullet hell later in the game.

Titan Attacks features five, 20-level worlds, each with new enemy types and gameplay variations in addition to simply new, pretty looking back drops. The story is all completely told through the text at the end of these worlds, and even then, much of the story is left to the imagination of the gamer. Why are the aliens attacking? When does this take place? Who thought one tank would be sufficient enough to quell a hostile invasion and eventually win an entire war? These sorts of questions never get answered, but they don’t need to be, either. The game recognizes what it is, and instead builds a universe in which the player puts together the pieces on their own. The slowly demolished cityscapes, on the moon and Mars as well no less, implies human civilization has reached interplanetary colonization. I enjoy that sort of subtlety. Traveling from Earth to the Moon, Mars, Saturn, and eventually Titan itself, the player is tasked with new challenges. The Moon will introduce incoming asteroids, and the Mars enemies will fly around in Galaga-esque patterns. These sorts of call backs to other arcade cabinets were a nice touch. (For those that don’t know what those are, put down the Call of Duty, you cheeky scrublord, and go play an arcade game)

For all it does right, Titan Attacks is not without its fair share of drawbacks. The five bosses are an area of missed opportunity. They appear at the end of each world, and could have offered a challenge similar to the way other bullet hell shooters do, using intricate patterns of fire from which the player must dodge, but as they are now, are really just bigger normal enemies. The difficulty they present is akin to Mortal Kombat’s Shao Kahn. The big baddies will have a bigger health bar, and will be able to shoot four shots as well as mines. Bullet sponges are generally a lackluster way to go when it comes to boss battles, and these were no exception. Also, the game is too short. There is nothing to do after beating the campaign other than to do it again and try to get a higher score on the leaderboards. Titan Attacks would have benefited from some sort of Infinite Mode unlocked after the main campaign. The game doesn’t have too much replay value once you get all the trophies for it. My final and strangest complaint: I’ve never played a game this naturally loud before. The game’s volume is unbalanced, and makes listening to the sound effect of the rocket launcher firing just a terrible mess. (Get that upgrade last to save your precious listening holes) On HD televisions, turning the volume really low made the game sound normal, but even when I brought the volume to zero on an SD TV, the game was still louder than it needed to be. Beware of Titan Attack’s weird audio problems. 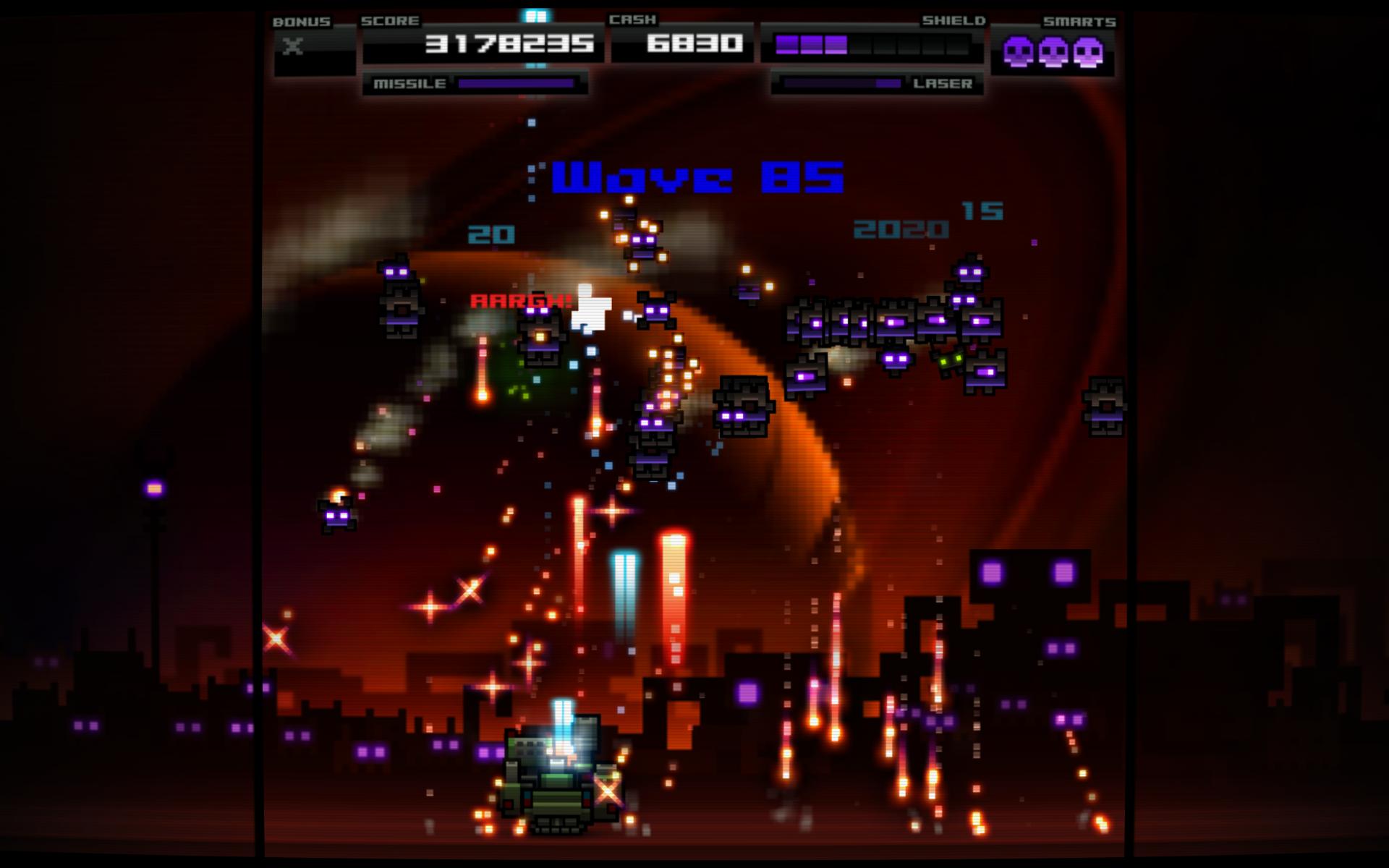 Overall, I felt like my 3-4 hours with Titan Attacks was well spent. The game is definitely a one-and-done title if playing this on your PS3 or PS4, as it is more well-suited to the lighter consumption. playing on the Vita is your best bet if you have the option. If not, the console versions won’t disappoint either. Just be aware that Titan Attacks will tide you over only for a few hours. One ought to seek further nourishment elsewhere, lest ye starve to death trying to suck the marrow from this game’s bones.

Obligatory Number at the End: 7.75